Nashville style hot chicken is having a bit of a moment right now in Louisville. It’s a simple dish- fried chicken covered in a fiery paste sat atop a piece of white bread- but it’s one that will have you remembering it (and the face sweats you had while eating it) for days.

While hot chicken may be a relatively new craze in Louisville, it’s nothing new to our neighbors 175 miles south where the dish originated over 70 years ago. The story goes that Thornton Prince’s wife wanted to get back at him for bad behavior and gave his Sunday chicken a spicy kick.

Her plans to teach him a lesson backfired, though, as he loved it. Thus, Prince’s Hot Chicken Shack was born and this spicy take on simple Southern food began its journey toward trendiness.

There’ve been places in Louisville selling hot chicken for years, but its popularity skyrocketed when Manny & Merle added it to their menu. The hot chicken was incredibly successful and owner Tony Palombino decided to open a restaurant that focused solely on the hotly selling bird. Thus, Joella’s Hot Chicken was born.

As a lover of all things spicy and fried I had no doubt I’d love this dish, I just wasn’t sure where I would find the best hot chicken in Louisville. So, I set a (really tough) challenge for myself. I’d embark on a Louisville hot chicken tasting and find out which of these super popular eateries is serving the best Nashville hot chicken.

I judged Joella’s and Royals on the quality of the chicken, the spice level, the sides, drinks, ambience, and price. Who won? Read on to find out.

Both Joella’s and Royals offer a quarter dark, quarter white, half bird, and chicken tender option. Both places also have sandwiches on the menu, and Joella’s serves wings as well. 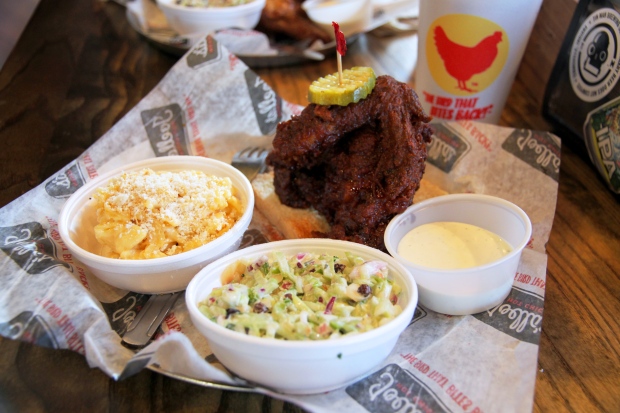 The quarter white with 2 sides and ranch at Joella’s

For comparison’s sake, I ordered a quarter white at both places. (I know, dark meat has more flavor but I like white better.) Both were good size pieces of chicken with nice, crispy skin, but the chicken I had at Royals had more meat on the bone and was so very tender.

Winner: Royals- you can’t argue with a huge hunk of tender meat

If you can’t handle spice, don’t fret. Royals and Joella’s both offer different spice levels- from classic fried to I can’t even handle it spicy.

Because I love spice and apparently have a death wish for my GI tract, I went for the hottest offered at each location, called Fire-in da-Hole at Joella’s and Gonzo at Royals. The server at Joella’s looked incredibly concerned as he set down my food, and the man taking my order at Royals actually warned me that the sauce was made from the three hottest peppers in the world. Bring it on, I said.

They were both, unsurprisingly, very spicy. I had a good forehead sweat going and needed some extra napkins for nose blowing, especially at Royals. It wasn’t anything I couldn’t handle, though, and I happily cleared my plate at both places.

I was surprised at how well both Joella’s and Royals balanced spice with flavor. So many times when you eat really spicy foods your taste buds get blown out, not here.

Winner: Royals- the extra kick took it over the top 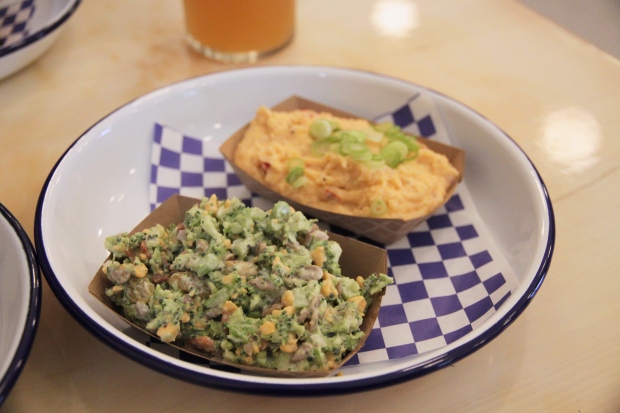 Broccoli and bacon salad and pimento cheese grits at Royals

I tried to go for similar items at both places so I could get an accurate comparison. At Joella’s I had the creamy mac and cheese and broccoli slaw, and I went with the pimento cheese grits and broccoli and bacon salad at Royals.

Creamy mac and cheese at Joella’s

I had high hopes for the pimento cheese grits, but I found they could have been improved with a little more seasoning. Plus, they had steep competition as the mac and cheese at Joella’s is just simply amazing- creamy and cheesy without feeling too heavy.  The broccoli dishes were about equally as good, with Royals maybe having the slight edge because bacon.

Winner: Joella’s- that mac and cheese, though

Both places serve a variety of craft beers, many from the local area.

Joella’s also has Boylan sodas, a type of soda made with cane sugar instead of the high fructose corn syrup found in many mainstream American brands. I don’t really drink soda, but I had a black cherry Boylan was blown away. The sweetness was the perfect contrast to all the spice.

In addition to a pretty large beer list, Royals also serves bourbon slushies. While I’ve never had them there, I’ve tried them down the street at Feast and they are just as incredible as you think a bourbon slushie would be.

(Disclaimer: Joella’s has multiple locations, but I’ve only been to the St. Matthews location so that’s the one I will be writing about.)

At both Joella’s and Royals you order at the till, take a number, find a table, and wait for your food to be brought out.

Joella’s is housed in the original BoomBozz location on Frankfort Avenue and it’s tight quarters. There’s a small patio out back with additional tables, but don’t be surprised if you have to wait for a seat. 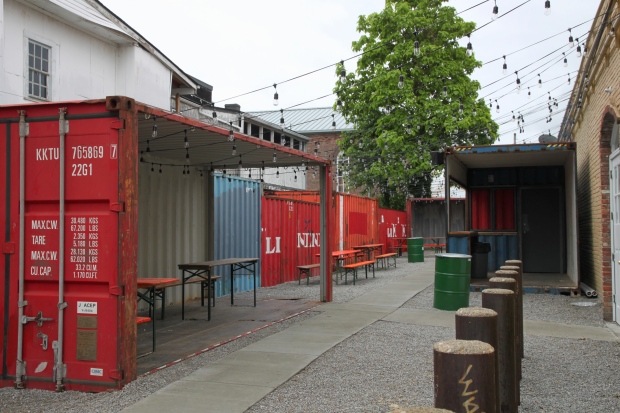 Royals has a bigger space, with high ceilings, a lighter color scheme, and ample outdoor seating complete with a shipping container bar and strung up lights!

Really, it is. Both of these places are serving up kick ass hot chicken and you won’t be disappointed choosing either. And if you don’t believe me, I suggest you stage your own Louisville hot chicken taste off.

About Chew on Lou

A Louisville food blog written by Amanda Slavinsky, a former nomadic travel writer who is exploring her new hometown one bite (and beer) at a time.